We educate to protect our environment, the health and well-being of our communities. Safety is our number one priority.

The Attack Fire Hose is a key firefighting tool. How has it changed over time?

A fire hose is a high-pressure hose that carries water to a fire to extinguish it. It's an essential pieces of firefighting equipment necessary to carry water from a fire engine. The present day design has been refined over centuries of firefighting.

Before the invention of fire hose, fixed nozzles on fire engines were used. In the 16th century the Van der Heyden brother’s, from Holland, realised if they riveted leather strips together, they could produce a hose pipe. This would bring the jet of water from a fire engine much closer to a burning building. They sold the idea and this new method of firefighting spread across Europe.

There are two main types of hose, delivery hose and suction hose. Lengths of hose are joined using couplings.

A Delivery hose helps to provide water under pressure. The pressure enables the water that is projected out of the nozzle, at the end of the hose, to reach the fire. It also rapidly provide lots of water to put it out as quickly as possible. 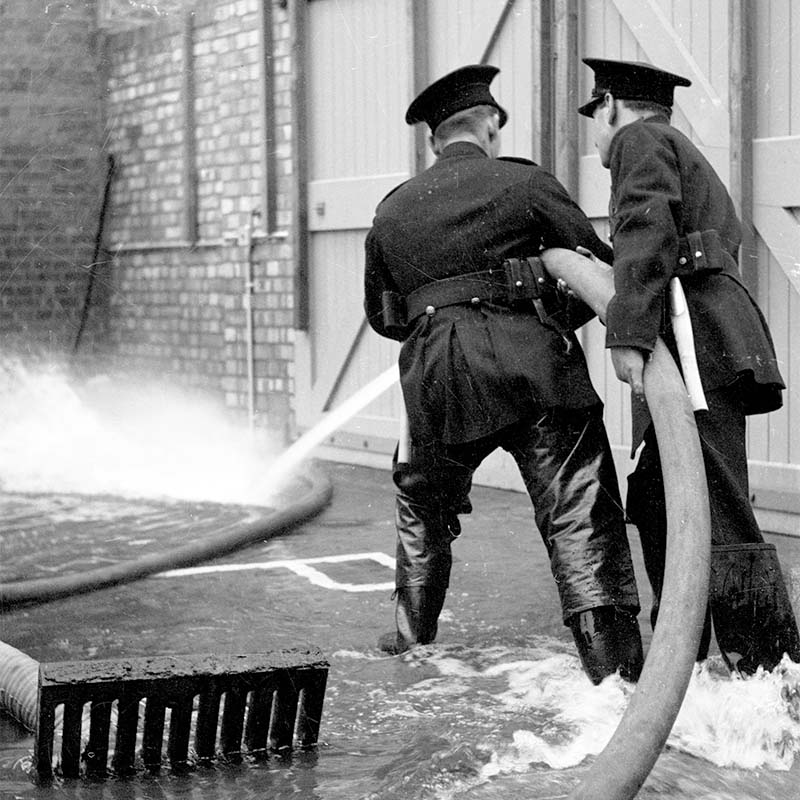 The first hose used was made of leather. It was made in short lengths due to its great weight. It had to be greased to keep it flexible and prevent it from cracking and this made it difficult to handle. The hose pipe was copper riveted throughout its length, and was not watertight, often leaking.

Following the leather came flax (woven) hose. Various materials were used experimentally but flax, also known as linseed, became the standard material used and was first manufactured in Scotland in 1850. When in use, unlined hose at first leaks, but as the fabric becomes saturated with water, the threads of the fabric swell, and the hose becomes nearly watertight.

After use these hoses had to be hung up to dry and fire stations had hose drying towers. They were very high maintenance, and this caused problems during the Second World War when fires were continuous.

To overcome the problem of leakage and subsequent possible water damage, rubber lined hose was developed in the 19th century. This was bulkier and heavier than unlined hose.

There are two types of this delivery hose, fire hose and hose reel tubing

Fire hose is made of a special re-enforced plastic. It is made to withstand internal pressure created when water is pumped through it at pressure. When not in use this hose is flat and can be rolled up so that it is easily carried, and it can be stowed in the lockers of fire engines.

Hose-reel tubing is carried on rotating drums on all front-line pumping fire engines.

It is very flexible, can withstand very high pressure and can be supplied with water from the pumping engines ‘on board’ water tank.

Suction hose is used when it is necessary to collect water for firefighting from an open supply, such as a pond or river. 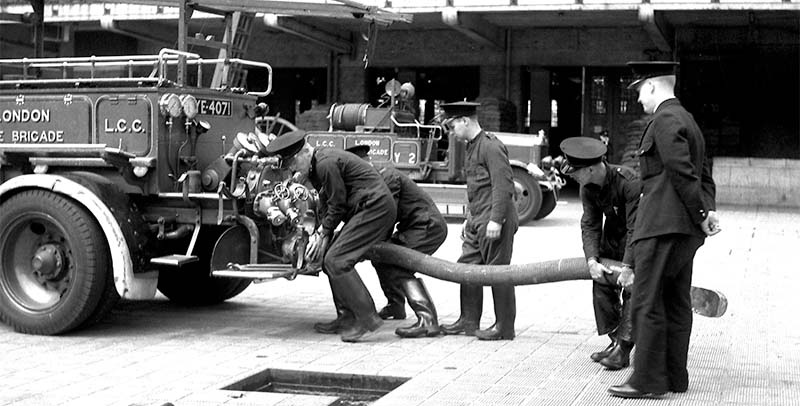 This was first invented in 1690 by John Lofting and was advertised as a ‘sucking worm’. It was made from ‘canvas or leathern’ and had to be strengthened by binding it with steel wire.

Modern examples are now generally made of heavy-duty plastic with wire strengthening coils inside. This helps it to withstand external pressure. Because of its construction it is hard to the touch and is called hard suction within the fire service. It has a larger diameter than ordinary fire hose and is supplied in much shorter lengths. This is usually four to each pumping fire engine.

When used from open water, suction hose has a strainer fitted to it. This is to prevent ‘foreign objects’ such as weed, leaves and other debris from entering it and damaging the fire pump using it.

Learn more about modern hose and how it is maintained

This article was researched and written by museum volunteer Halima B

View all
View all